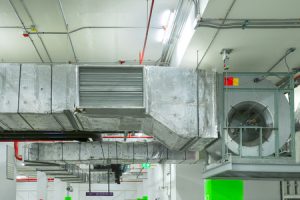 Fans typically have rotating blades. Anytime you have rotating blades, there’s always the potential for injury, especially if a person gets too close. If and when the guard surrounding the blade is removed, and someone accidentally puts a finger, arm, or other body part near that blade, there’s the potential for them to lose it. Obviously, guards shouldn’t be removed unless the unit is de-energized! When dealing with guards, wear gloves since guards often have sharp metal edges.

Meanwhile, when people are near blowing fans, they should ideally be wearing eye and respiratory protection. Say, for example, a fan ends up blowing dust particles into the air– you don’t want harmful dust getting into people’s lungs or eyes, right?

Too Hot Too Touch

Fans can become extremely hot when they’re turned on and running, as well as even after they’re turned off. Would you want to touch a fan that’s 220 degrees? No! Yet all too often people will assume just because a fan is turned off that it’s cool to the touch… and that’s not always the case. Hot surface areas can cause burns.

What about loose parts on fans? No machinery lasts forever. What if a part malfunctions? What if it becomes dislodged from its normal position? Obviously, loose parts create a safety hazard. Listen for unusual noises, as well as squeaks and squeals, which could indicate a problem. If a piece is missing from a fan, don’t use it– get it fixed before turning it back on.

If there’s a high-speed airflow coming from a fan, it has the potential to knock a person off their feet, especially if they stand too close to the fan. With floor fans on the ground (or close to it), there’s also the potential for objects to enter the fan and then become a projectile, injuring any person in close proximity… which is often why warehouses and such choose to utilize ceiling fans to avoid projectile problems.

For buildings with industrial ceiling fans, it’s important to make sure that the sprinkler system and the fan placement (and blade direction) makes sense. You don’t want a fan that’s feeding a fire– you want it to help put one out! In buildings where you have large industrial ceiling fans sharing space with sprinkler systems, make sure the maximum fan diameter doesn’t exceed 24 feet. Fans should be centered between four adjacent sprinklers, with a vertical clearance from the fan to the sprinkler deflector being a minimum of 3 feet. And interlock the fan so it shuts down immediately when receiving a water-flow signal from the sprinkler system, as that’s ideal.

To minimize safety hazards associated with industrial fans, it’s best to make sure they’re well-maintained and cared for– and Dynamic Fan offers this as a service. If you’ve been wondering how your fans are truly doing, and you think they might need an inspection and/or repairs, have Dynamic Fan take a look. Providing welding and commercial fan services, Dynamic Fan fixes rotors, motors, impellers, fan blades, wheels, compressors and more.

What’s the number one thing that has lead to success for Dynamic Fan? It’s the “customer first” philosophy. Giving each project a thorough attention to detail and making sure everything is done right, Dynamic Fan knows fan systems and all about air flow needs– and knows how to treat customers well.

Dynamic Fan has been in business for over 30 years, serving a variety of industries and their fan needs. Typically, repairs and maintenance services can be completed within as little as 48 hours, which can be very beneficial to a company that doesn’t want to deal with extended downtimes.